Gold is the most important resource in Lords Mobile. I know the purple gems are worth more… But gems aren’t resources. Gold is needed in almost every task in Lords Mobile and it is a critical necessity. There is nothing worse than needing to do something and then realizing that you have run out of gold!

Manors are the most effective technique to easily gain gold without working for it. You just build the manors and then relax like a king as your pockets fill-up with gold.

At the beginning of the game, before you need a lot of infirmaries and barracks, I would strongly recommend having at least 5-6 manors. Try aim for an hourly production of at least 30,000 – 40,000.

Obviously, you will also need to work on your Gold Harvesting Research in the Army Leadership Technology Tree and the Familiar Tree that will give you a combined boost of 90%.

The one important reminder is that gold collected by the manor can be collected by an enemy when they attack you. If you’ve filled up on gold, use it, trade it, or activate a shield. Gold is more than enough of a reason for an enemy to attack you.

There is also the option of building brand new castles with new accounts dedicated to farming gold.

The trading ship serves two purposes when it comes to your gold development. It can protect your gold from being wasted and it can also gain you large chunks of gold.

In general, I will always trade anything for gold. If I see gold available to buy on the ship I will trade in a heartbeat. Gold is worth much more than the other resources.

For a full-blown guide on how to dominate the Trading Ship, click here.

Deposits of gold can be found all across the kingdom. Farm the gold and you will add more coins to your collection (and also win materials sometimes).

There are hard ways to get gold and then there are easy ways, farming for gold falls out somewhere in the middle. It’s easier than making dinner but much harder than paying $99 for the resource pack…

It is important to put on the resource gear before go resource collecting. 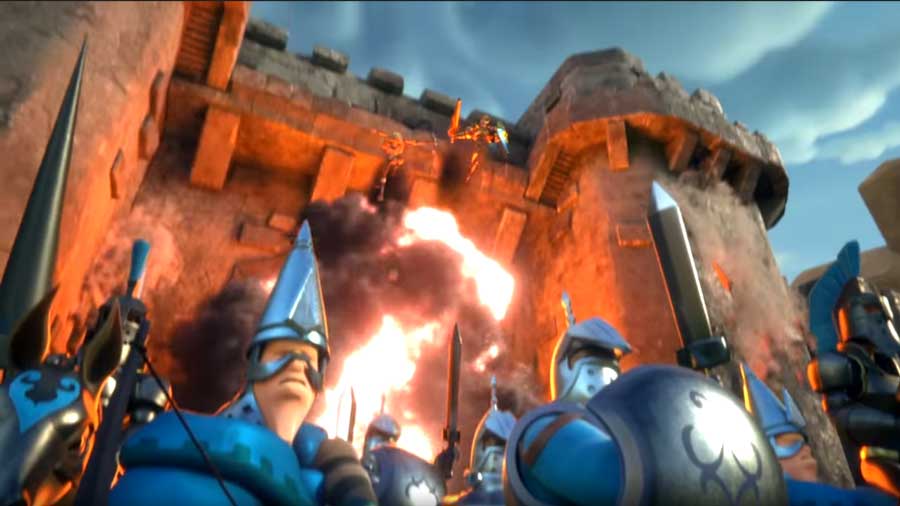 This may sound a bad strategy but it is actually very effective. I’ve tried it many times and it works. You can gain millions of gold by just scouting castles, examining their resource count, and then farming them. Just bear in mind that their vault will keep a good chunk away from you.

Another thing to remember is that you may need to be prepared for a backlash. Every castle you attack will have an angry person behind it, and possibly an angry guild behind that person. 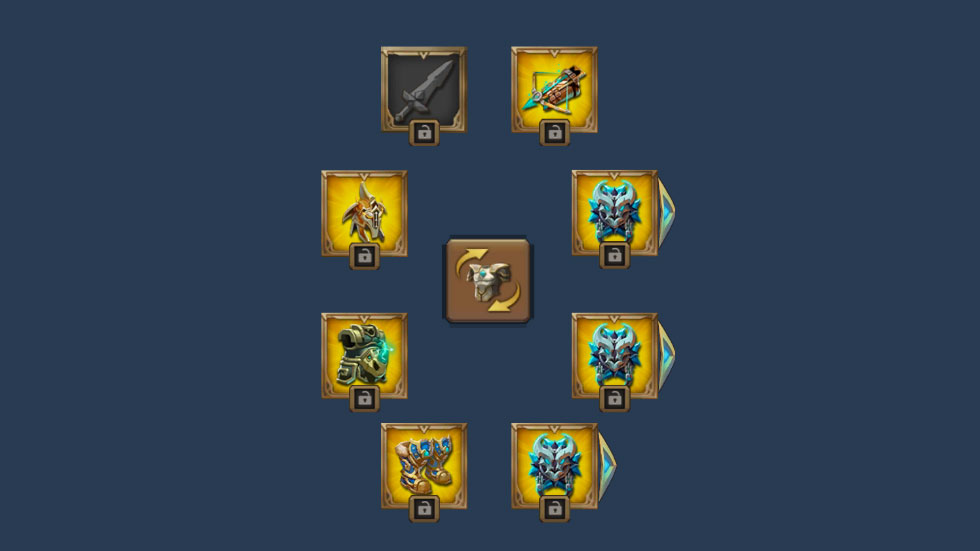 There is special gear that will help you boost your gold production. This is all the F2P gear. Obviously, there are much better Paid-Gear that is available in the store.

Expert Tip: There are gold boosts that will give you 10% boosts and 25% boosts. These can be activated using that weird looking button on the right side of the screen, in the middle.

Also the only hero that boosts gold is Soul Forger. 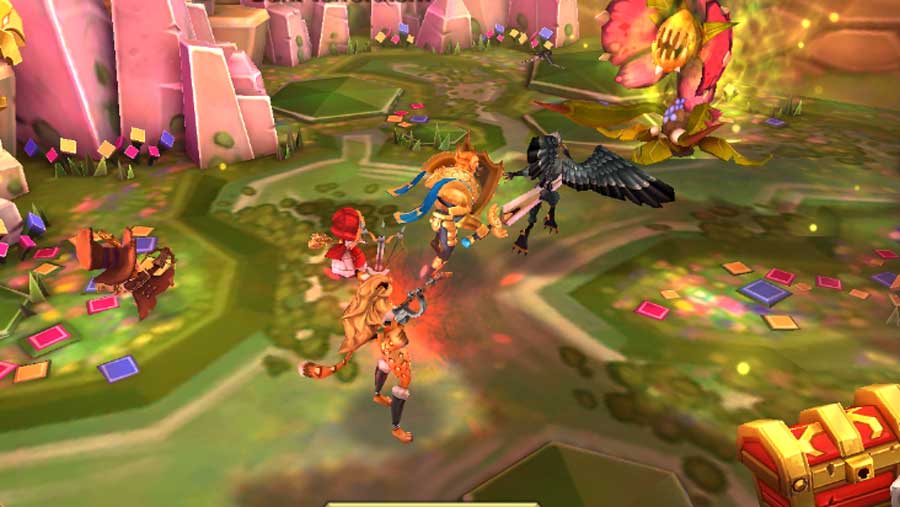 I’m sure many people will disagree with me on this piece of advice, but as usual, I’m correct.

If you are about to use gems to pay for gold, take your hand and slap yourself. I would suggest gambling your gems to buy holy stars. Gold is a common reward for hitting the monster and your odds of getting a lot of gold are high.

You may even win the labyrinth treasure. You won’t. Click here to see why.

Use this tip with caution, because this can backfire in a big way.

If you’re really desperate to get a lot of gold quickly, just attack high might players, and capture their leader. You can then put their leader for ransom. Depending on the might of the castle, they may pay up to 20-million for their leader back.

Obviously, if they would pay 20-million they are probably in a guild with very powerful players. These players will likely flank you and burn you like a marshmallow.

This is probably the best idea in the list. Trade.

Find someone who wants speed-ups or other other resources. Offer to trade. It’s that simple.

First, try and find a buyer in your guild. It’s just easier that way. If you can’t find someone in your guild, publish it on the kingdom chat or try and contact players from other guilds.

Just don’t be a pest. No one likes a pest. 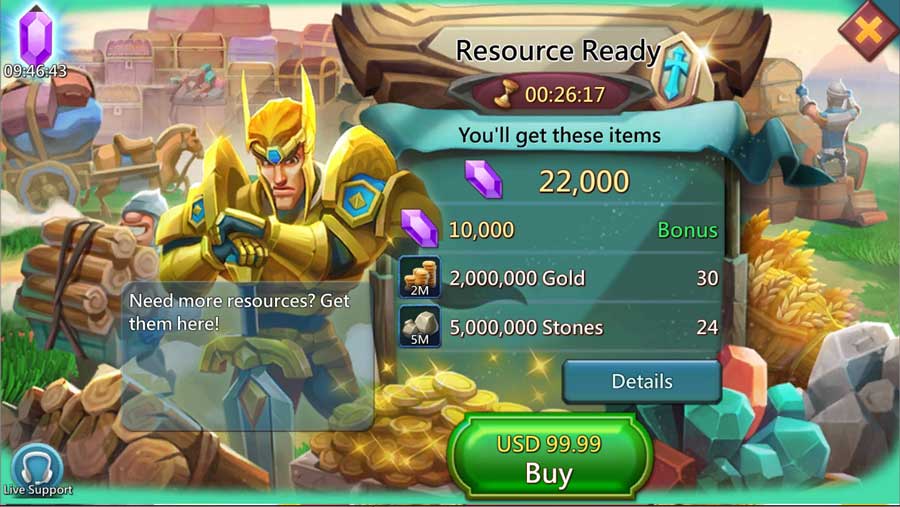 This advice is only for people who would rather succeed at Lords Mobile than pay for lunch and dinner.

Most packs come with resources as well.

There is obviously the “Resource Ready” pack that shows up often. Lords Mobile really wants you to buy this pack. It’s only $99 after all. This pack comes with 60-million of gold. That should be enough to cover almost any expense in Lords Mobile.

If you are buying a pack in order to get gold and you don’t have a ridiculous budget, I would recommend the Monthly Pack.

Read more about the best packs to buy over here.

There are other ways to get gold, but most of them will only give small batches of gold or the chances of getting anything worthwhile are too low. Here are a few more ideas that weren’t good enough to warrant their own sub-heading:

Top Strategies to Increase Your Might in Lords Mobile