If you’ve come this far, you are doing pretty well. Here is the idiot’s guide to owning the challenges in Chapter 7 of Lords Mobile’s Elite Stages. Like the other chapter guides, this strategy is for Free-To-Play players (although I will mention notable P2P heroes when relevant).

Chapter 7 is also known as Way of Fire and Lava Plateau. I have no idea why IGG give these extra names for this chapter when no seems to really notice. They may as well have called it “Way of Ridiculousness” or something else more meaningful. My guess is that whoever came up with these names was sniffing a lot of glue at the time.

Important Note: If a player has reached Elite Stage 7, I hope that I can assume that he already has at least a few gold heroes. The gold heroes aren’t necessary, but they will have to be at least partially advanced. The most important factor will be the hero trophies. The more hero trophies, the better. Focus on collecting as many trophies as you can!

My suggestion would be to use my “colosseum dream team: to win this stage. This the best F2P balanced aggression team.

Part 1: I would recommend only using the ultimate for the red gem-forehead girl (aka Black Crow) and leave everyone else’s ultimate saved for part 2. She’ll regenerate quickly.

Part 3: Go wild on the ultimates aside. Keeping hitting anything that moves. Save the Prima Donna until she starts getting low. Aside for that, don’t hold back or save any of the ultimates. 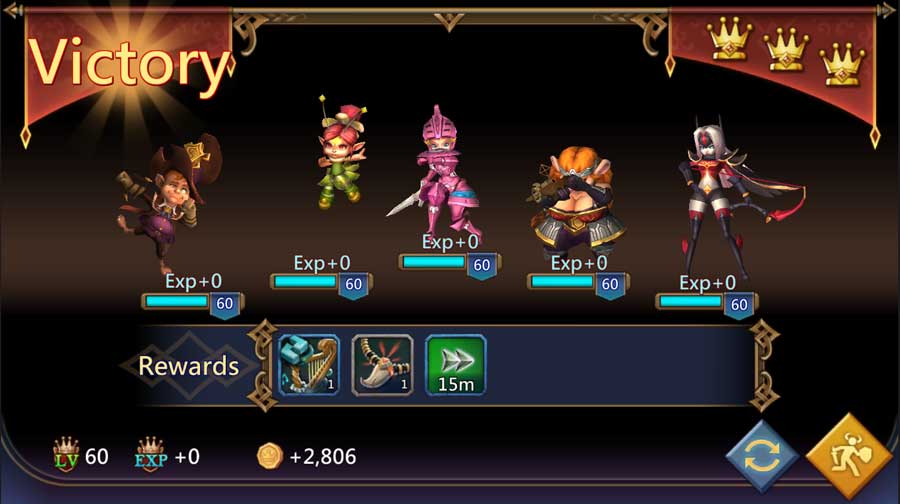 And that should bring you to the win! This is a rather easy level.

The Elite 7-6 is an interesting challenge. Stage 1 and stage 3 are difficult while stage 2 is fairly easy.

The trick for this stage is stunning. Keep stunning the hardest heroes and you’ll be able to make it through with 3 stars. Also, a lot of the difficulty with this level is timing. If it doesn’t work, keep on trying. This formula is solid. It will work eventually.

Stage 1: Beware of Shade. He’s harmless most of the time, but his ultimate attack is a nightmare especially to your most important player: Prima Donna. If he starts getting electric, hit him with everything you got. Don’t bother saving ultimates for stage 2. Stage 2 is easy.

Stage 2: This is easy. Save your ultimates for Stage 3 unless you really start getting low.

Stage 3: Keep throwing stuns at the Tracker to keep her from attacking, but all other ultimates should be focused on the smaller enemies. Once all the enemies are taken out, the shield around Tracker will fall and you can attack her with everything. 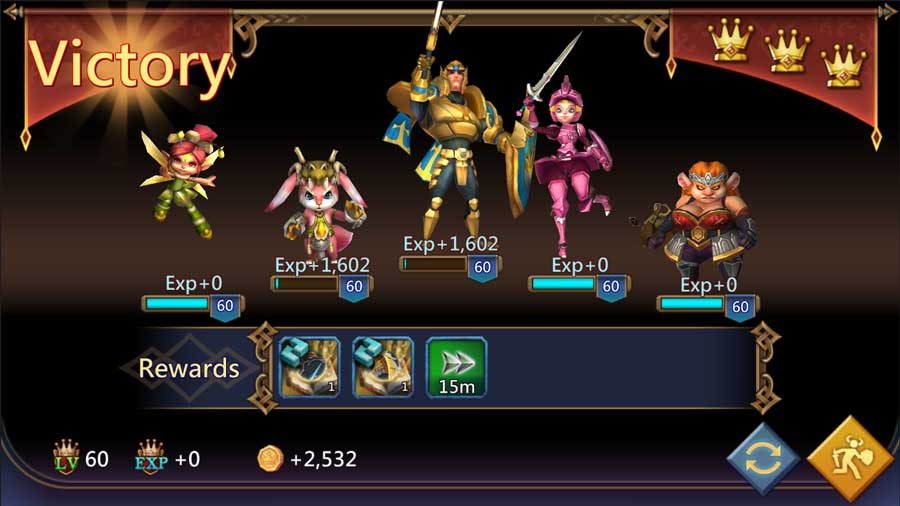 This is a hard stage. If you haven’t tried it yet and failed until your battery died, this is your warning! This is hard!

If you have heroes who are level 55 or they are green, you are going to want to use defensive-attack techniques. Focus on stunning the powerful enemies while you wear all the medium-power enemies with the non-ultimate attacks. Getting three stars with this technique is going to be difficult, but winning should be very possible if you follow the instructions.

Stage 1: This part is easy. Just focus all your attention on the dwarf. Once he’s gone, move over to the canons. You don’t have to bother trying to save your ultimates for stage 2.

Stage 3: Ridiculously hard. It’s a real juggling act of timing and precision. Tracker is a monster in this level. If she starts hitting your heroes they will die. Keep her occupied with doing the drunk circling with repetitive stun attacks.

If you have heroes that are gold and purple, you are going to want to attack with a lot of might and only a little stun.

Stage 1: Focus on the dwarf with all the ultimates and stuns and then destroy the canons.

Stage 2: Destroy everything. Easy. Save ultimates towards the end of the stage for Stage 3.

Stage 3: Focus all ultimates, especially stuns for tracker first and then focus on Soul Forger.

Tah Dah. You’ve done it! Or more like, you cheated and peeked on Marks Angry Review…

This challenge is among the hardest ones. At least for me. Even now, I still struggle to get it perfect.

There are many combos, but I prefer the lineup mentioned below!

Stage 2: The Gnome is a nightmare. He heals himself and so you are going to want to attack him with all your heroes in quick succession. Once he’s gone, the rest are easy-pickings.

Stage 3: Argh. This one is tough. Don’t use your ultimates right away. Wait of the reinforcements (more enemies that show up after a few seconds) to arrive. Try and use your stuns for maximum impact as soon as the reinforcements arrive. Catch the Bombin Goblin in the stun and try and include as many heroes to his left, hopefully until the Elementalist all the way on the left.

Keep in mind that Tinkus has something called “Last Burst” which will explode when he dies. Your Prima Donna (and Sea Squire if you use him) will probably die unless it’s strong enough…

Stage 1: This part is really frustrating. That massive turtle just won’t die. It almost feels like Lords Mobile is purposely messing around with you. The turtle always seems to regenerate just as he is about to die. First, kill all the other heroes before trying to take down the turtle. The trick to killing the turtle is to get all the heroes to ultimate-attack at the same time. Use the Rose Knight first, then hit with Tracker, let Death Knight throw it back. Just as the turtle is about to go to sleep, hit it with Child of Light. The regular attacks from the heroes should finish the stupid turtle off!

Stage 2: This one can be really difficult if you aren’t careful! The biggest enemy is the “purple annoying guy” also known as Shade. He’s useless unless he ultimates-attacks. If you let him Ultimate-Attack, you will probably lose at least 1-2 heroes (or all of them). Make sure you wait a solid 2-3 seconds before you stun him with Rose Knight. Rose Knights stun doesn’t reach all the way across the screen. Wait until Shade moves closer and then let each of the heroes have a turn to ultimate attack. You can wait a few seconds between each attack. If you see Shade starting to “gear up” start firing!

Please Note: Don’t waste any of your Ultimates-Attacks on the remaining enemies. Let your heroes regain their Ultimate-Attacks for Stage 3! Just make sure that you use your Prima Donna if your heroes are low on health.

Stage 3: The trick is to go for Prima Donna. She’s the who is going to wear you down. You will have to wait until you have all your heroes ready and then fire at her and stun her. You may have to try a few times as she will reload very quickly! If you see Night Raven about to attack, stun him!

Stage 1: Looks scarey but really easy! Just try and hit as many monsters in each ultimate attack.

Stage 2: Also really easy. Just attack early while they are all together. When they spread out your attacks won’t be as effective. Once you are almost finished, DO NOT use your ultimate-attacks to finish off the level. Save them. You will need them badly!

Stage 3: Very tricky if your not careful. Use Child of Light to hit all 4 enemy heroes at once. Let Black Crow hit right afterward, and then do whatever it takes not let the evil boy (Dark Follower) from ultimate-attacking you.

Keep in mind that once you finish a few of the first round heroes, the purple moron is going to appear behind you. Ignore whoever is left over from the first round, and focus everything on stopping Shade. He will destroy you unless you kill him very quickly.

Do you agree or disagree with my lineups for Elite Stage Chapter 7? Feel free to argue in the comments below. Just remember that you are most likely wrong. Why? Because I am most likely right…

Are you ready to get all the answers for Stage 8 of the Elite Levels. Good news! It’s ready now!

How to Boost Gold in Lords Mobile

How to Use the Cargo Ship on Lords Mobile