This post is a no-brainer. And some parts of this rant I’ve now started finding popping up around the internet.

GoDaddy’s initial pitch seems fantastic. Buy any .com domain for $8 or so and have a website with your name.

My Story with GoDaddy

I was one of those morons. I purchased a domain with them and I thought I had lucked out. Marks Angry Review is a pretty good name!

With a few minutes of research though, I realized that I was an idiot, and thankfully I now have a website with which to focus all of my rage.

It turns out that the money you save on the first year, you pay in excess every other year. What should cost no more than $10 a year (with namecheap for example), costs $25 a year with GoDaddy.

GoDaddy effectively give you free entry to a party, and then once inside, charge you an arm and leg to buy some beer.

You’re probably thinking. Big deal. $15 extra. Get over it.

Firstly, get lost. I don’t want your wise-crack opinion. My money is precious. I work hard for my money. I deserve to enjoy it. Keep your overly righteous opinion where it belongs. ARGGH.

Secondly, go away. Just, go away. I didn’t ask you.

Thirdly, it’s the principal. It’s about the ethics.

Fourthly, there are people that really have gotten hurt by this scam: The businesses that own hundreds of domains.

Back when domain-names were all the rage, and before the dot-com bubble burst, there were people buying domains like they were play-stations in ’90s. Think about a small time buyer with only 100 garbage domains. Think about his renewal cost. This small-time investor with a bunch of domains on his hands is about to find himself slapped with $2,500 to keep a domain that he already purchased.

(Please don’t get me talking about renewal fees. That’s a total scam.)

My Summary of GoDaddy

What really gets my blood boiling is how the entire scam is presented.

Some people already know that it costs $8 a year, but most people aren’t even aware that this is a continual cost. GoDaddy present the cost as a one time sale. This is how they get them. See screenshot here: 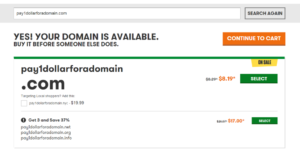 The average uneducated consumer, like I initially was, has no idea that this is a yearly tax. Who would assume that they had to pay a yearly levy on something that they already own?

Besides, their homepage is more complex than a fighter pilot cockpit.

I’m angry, and that’s how I hope I leave you.

Goodbye and go away. Leave some anger below.